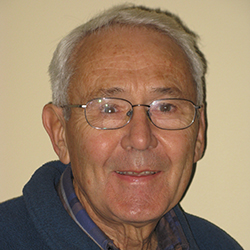 David is a UBC graduate in Medicine 1962. In 1963 he went with his wife Linda (B. Sc. Nursing UBC) to India with the United Church, working with Dr. Bob McClure for two years, and then a further three years at a village hospital in the Central Province. The family drove home to Canada via Pakistan, Afghanistan, Iran Turkey and Europe arriving in 1969 in Quebec city with daughter Kiran age three. Son Michael was born 1969. Moved to Vernon (Linda’s home town) in 1971. Did General Practice until 1989. David was made a Fellow of the College of Family Practice in 1986 and was also a president of the Vernon Medical Association. He shifted into full time family and marital counselling in 1990 after a three year training program and internship year. He Retired in 2000. He presented couples workshops for 12 years at Round Lake Native Alcohol and Drug treatment centre, and also led groups in Marriage Erichment, and Marriage Encounter for ten years. He was a founding board member of the Vernon Family Resource centre, and started a Lay Counseling training program and a pre-marriage course under its auspices.

His interests include mountain climbing, skiing, canoeing, cycling, politics, and local trail building society. He has had a career long interest in addictions, and has been following the drug use scene closely for 7 years particularly with regard to the so called “War on Drugs.” He has worked with StoptheViolenceBC speaking to Okanagan groups and municipal councils on illegal drug policy issues. He is a member of “LEAP”, Law Enforcement Against Prohibition, and the International Centre for Science in Drug Policy.